Leprosy Patients: Words will never explain what it must be like to be a Leprosy aged patient and someone sends you a gift…a Love Bundle…I feel so honoured to be part of this project that we started 20 years ago. I get teary every year, knowing what it means to them…they feel that they haven’t been forgotten and it is so special to them. Can you imagine what it must be like to be sick, shunned and hidden away? I have two stories to tell you and you will understand how precious your gift is. 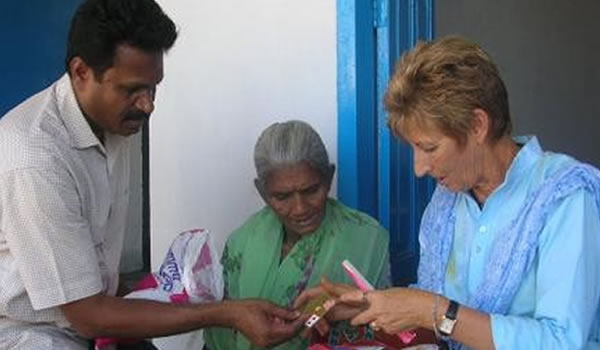 In the beginning in 1983, before New Hope was a registered charity and audited annually as is the case now, Eliazar and Trustees were working with 2,234 people living in colonies in the area they covered. In December 1983 while working they heard and then saw a typical Oriya bullock cart with its huge steel rimmed wheels creaking across the barren land pulled by a pair of oxen with bells on the ears as is common even today. Three men got down and came across to near where the dressings were going on, but not too close.

The eldest one called out that he was the village leader of a nearby village and one of the men with him was here with his ‘dead’ wife. He called out to her and she clambers off the back board of the cart and squats on the ground. He then takes out a piece of paper and puts it on the ground and places a stone on top of it. “It’s her Death Certificate’. She is one of you people.” This social stigma has decreased somewhat where New Hope works, but it is still there in many subtle ways – So for the last 28 years Eliazar and New Hope have been Sampani’s sole support. The young man, Bhakti is a trained cobbler (shoemaker) who grew up with New Hope as a Polio victim and was trained and employed by New Hope to make protective footwear to prevent ulcers caused by the now curable disease)
It made me realise why all the ‘oldies’ get so excited and are so happy when we distribute Love Bundles – Its really Christmas for them. When the women receive their Bundles they usually sit around and discuss which colour sari suited them best and often swap! – We women don’t change the world over.

I would also like to tell you about my good friend Sakuntala.

She has been with us for as long as we have had the Home I think. She is just a ‘part’ of New Hope. Her life story is almost too sad to tell, until she came to stay with us. What ever vision and its very little, Sakuntala has is due to all of the eye operations funded through New Hope Australia, and her wheel chairs and of course the Bundle of Love –
she gets the first Love Bundle out of courtesy to her age and now being the most senior aged woman in the Centre.

Thank you for supporting this appeal. Your Sincerely

To those who give and to those who receive a Bundle of Love card, all have been part of a chain of events that has changed the quality of life of one or more of some of the poorest isolated elderly Leprosy patients in India. All we can say as the people who received the funds and make it possible to happen is – THANK YOU