It has been a long time since Maggie sister has put out a newsletter for the subscribers of New Hope Australia. At this time Maggie sister is very ill and we are filling in to take the pressure off her. With her present health problem we are hoping that she can take a break from the intensive fund raising she usually does and others will take a ‘share’ in this important role.

Like Maggie sister we are stepping out in faith and to quote her “I’m stepping out in faith to ask if you could help with New Hope Rural Leprosy Trust – India. I know that this year I have failed in being able to send enough money to New Hope India and that because of this some projects have had to have been pulled back a little. I haven’t had good health this year and so I haven’t been able to actively raise funds as much as I have over the past 26 years”. Maggie sister.

It’s a long newsletter, but in the end I wish you to know that we appreciate you simply being part of our ‘New Hope family’ – Please feel free to email any question. I think you all know that donations over $2 Donations to New Hope Australia are Tax deductible with DGR Status.

Let me go back to October 2014 and use the Hud Hud Cyclone as a marker. Its destruction was indescribable. The picture we had sent became real for Maggie sister and Allan (now Mr and Mrs McMullen) when they arrived in January 2016. They saw how many of the giant old mango trees that you would have thought could never be shifted even by a cyclone had gone. Sandy Furtado and Gary Urquhart had been at New Hope in January 2015 and we appreciate beyond words the work they did helping to ‘clean up’. Yet in all the effort you can still see things not like they used to be. Pieces of small broken cement sheets on the ground here and there. Stacks of pruned trees that will be sent to the timber mill for cutting to use later. It’s hard to imagine what would not have happened if the people (you) in the New Hope Australia network had not given so generously. 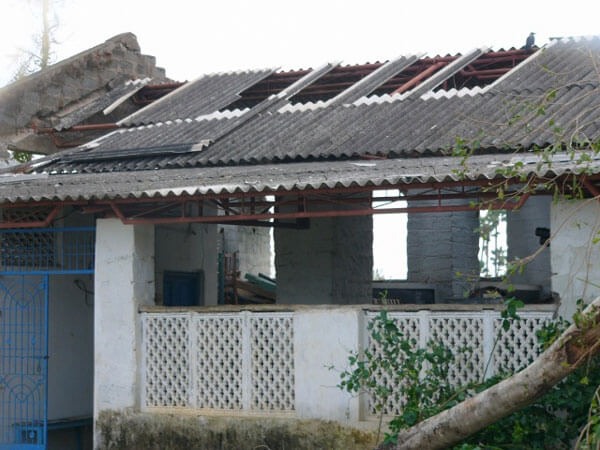 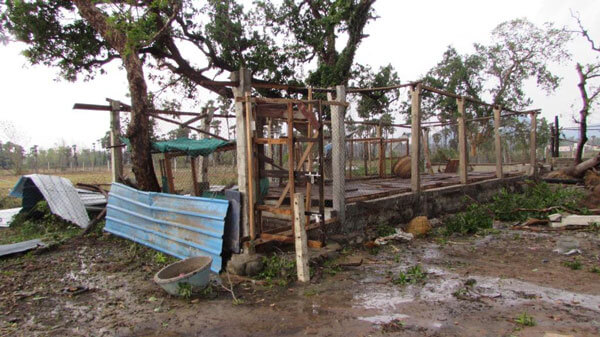 The Bike Ride four ten days in January of this year were fantastic bearing all things in mind. As the Director (under work pressure) I was so happy that Allan had volunteered to be the ‘organiser’ and co-ordinate with the Indian team who did a great job. For those on their second ride it was also sad because of the passing of young Vasu Gabriel in March 2015. His passing could be seen in so many ways it was hard to grasp. In all 14 Australians and 2 Brits came for the event. The couple from England had been volunteers when we were ‘young Indians establishing a rehabilitation leprosy project and treating more than 2,300 positive leprosy patients across 23 leprosy colonies in north west Orissa (now Odisha)

In these ten years we have changed from giving an education in a tutorial system to a recognized school in a very modern building donated by a couple in Japan; retired teachers. Although we lost a lot in the cyclone and a subsequent tornado the ‘garden’ – from vegetables to grass for the cows and grazing for the goats held its own. The garden was the easiest repair job as nature showed us and our pumpkin harvest was great.The bike riders met all of the children, one on one in Kothavalsa. Many are sponsored and I hope those who are sponsoring received a photograph of the child with Maggie sister. Let me know if you didn’t. It allowed me to reflect on the changes that Maggie sister has seen over just the last 10 years. It was amazing to see so many grown up young people, not shy to speak to visitors in their Indian English – which is not Aussie at all! Little girls are now teenagers and going to College. I will keep this simple. Not one child going to school comes from a so called ‘normal’ background. These children are well cared for by New Hope but the children are self achievers, as a team, a group, a younger generation community. It gave us a sense of what we dreamed of years ago; independent and educated with their own personality. New Hope doesn’t portray hungry children in rags. That is how many of them actually do come to New Hope but New Hope sees that as yesterday. Tomorrow is what counts for the child. 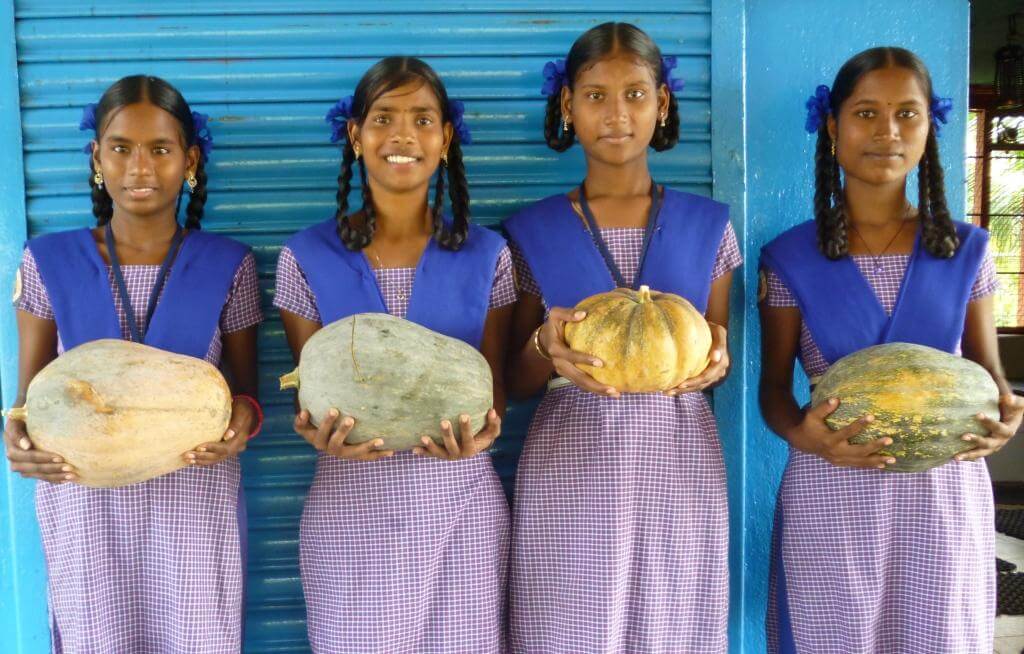 Self sufficiency is an important goal. More and more solar is being added as funds come in.

MUNIGUDA – This remote and isolated place in western Odisha where from my own 25 plus years know how much change has happened because Australians gave funds for Safe Delivery Kits, Anti-Tetanus immunization and Polio immunization. What a great sense of satisfaction for New Hope; for a backward State like Odisha, for a nation that was so far behind has now eradicated Polio. Leprosy and Polio and Safe Delivery Kits were the main targets of our collaboration with Maggie sister and goes back 25 years to days when we trekked up hills on paths to isolated villages where the idea of a ‘white person’ was unknown! Leprosy patients lived and were treated terribly in those days and it is a kind of celebration to see positive changes. Sadly the disease is far far away from eradication. Namaste House – was once almost 75% of Polio crippled children. The corrective surgery offered in those times was made possible through support from Australian donors. Namaste House is now a Home for Challenged Children. Reality is this is the only place for such children in western Odisha. Part of the mental disability was resolved with the introduction of iodized salt by us 15 years ago. What a riot of joy and simple ‘this is me’ attitude of the children. They love social activates of music and singing and to entertain. The people who care for these young people are to be admired for their patience and devotion. These young people are simply a part of the New Hope family, sentimentally and in reality of the situation they live in. We have been able to keep our links with the Dongria Kondh tribal community in the surrounding hill forests against the odds of anti-social interference caused by the threat of mining in the hills that is considered sacred to the tribals. Its complex and we see beyond that in being links to non formal education. Through New Hope efforts formal education and care centers are now possible. We have maintained our links with better sustainable agro activities too. For women we have been their key to better mother and child health. We have had to change our working plan for cataract eye operations. It’s been a challenge but the number who have had the opportunity to cataract eye surgery as not decreased. The Community Centre is their link for both health and to access rights that they are entitled too. People who give virtual gifts on line for seeds and tree seedling would see the result of that in the 55 tribal villages we cover.

LOVE BUNDLES: Of the many Love Bundles pictures I like this one of Tribal Women Health Workers giving out bundles to destitute women in Muniguda Community Centre. 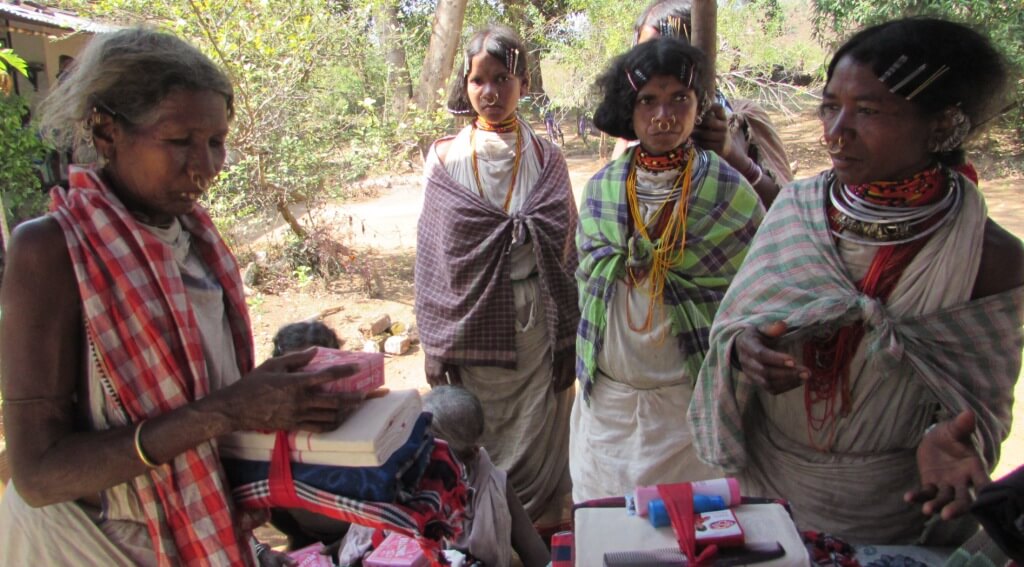 Thank you to all of you who faithfully give to our Love Bundle appeal once a year and many who give at different times during the year. We hand out these gifts close to Christmas. Your Bundle goes out to people at a leprosy clinic taken over from Gandhi Memorial Leprosy Foundation by New Hope in a remote rural area. Rural people with cured leprosy and having ulcers; part of the disease problem. Truth is that the disease is not eradicated as we are often led to believe and I we see again, young people at the Outpatients Clinics we organize.

It worries us all that young people are coming with early deformities – self reporting to our Clinics. I mention the gratitude for the Love Bundles because these simple gifts change the quality of life of some of the still poorest people, especially aged in leprosy colonies and aged in the tribal villages, to homeless women in the city shelter we are now assisting.